I finally watched Black Panther. And I loved it. Tremendously. And I just want to list 4 things that I think were incredible about it as a black superhero movie. There were plenty of other things I could have put on this list, but I wanna keep it simple. So here we go…

1. He had a community 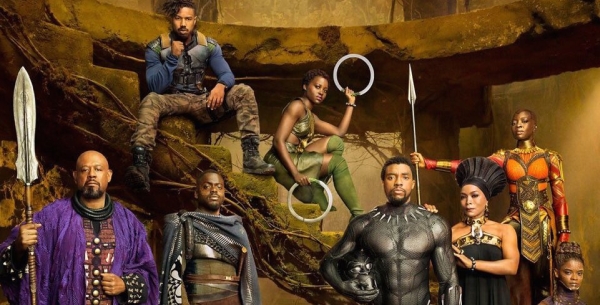 Black Panther is the only superhero who’s origin story had a fully fleshed out, deeply extensive community. My man had a whole country behind him. Not only that, but his community was actually healthy. Tony Stark had Pepper and War Machine, Captain America had Bucky and Peggy and Thor had Loki and his Dad, but that could hardly be called a functional family. Even Wonder Woman, who had a whole island of Amazonian warriors living with her, didn’t have a little sister teasing her mid-mission or a mother reminding her mid-battle to “Show them who you are!”

But Black Panther had his mother, his uncle Zuri, his little sister Shuri, his girlfriend Nakia, his right hand general Okoye, his friend W’Kabi and not to mention his entire country at his beck and call. The whole storyline relied heavily on deeply rooted relationships. Black Panther showed us very clearly that in Wakanda, it takes a village to raise a superhero.

The Women Were Empowered

The way women were portrayed in Black Panther was starkly different from the way they’ve been portrayed in basically every other Marvel movie—or every other superhero movie for that matter. First of all, they weren’t sexualized. Which is funny because traditionally it’s black women who are portrayed as the vixens of comic books. There’s literally a DC character named Vixen for crying out loud who’s unnecessarily sexy.

But not in Black Panther. We never saw any cleavage, skin tight leather suits or random butt shots that we even got in Wonder Woman. I mean we probably saw Lupita’s legs once in passing in that dress with the thigh high slit.

But not only were women not sexualized, they were actually bonafide bosses. All the main women were fighters and each of them had a hand at fighting the main villain.(Incidentally, the bulk of the final fight with Killmonger was actually a three-minute sequence of him fighting a bunch of women. But that’s another conversation in and of itself).

Did you know that Black Panther’s little sister Shuri is the smartest character in the Marvel cinematic universe? Not the world. Not the galaxy. But the ENTIRE FREAKING MARVEL UNIVERSE! The producer of Black Panther claims that she’s even smarter than Tony Stark for crying out loud. And she’s 16! The smartest character in the entire Marvel cinematic universe is a 16-year-old black girl from Africa. How empowering is that? For more info on it, check out this video.

The villain in Black Panther was actually sane and logical. Which made him that much cooler. In Civil War, Zemo was mad that his parents got killed and spent the next decade obsessing over killing them. He was a tad bit unstable. Loki was narcissistic with relentless sociopathic tendencies. Ultron wasn’t even human so he’s crazy by default. In Ragnarok, Hela was the essence of a bitter chick whose clothes were too tight. All of them were crazy.

But Erik Killmonger was a regular kid who got orphaned and who actually wanted to do something good for his country. His whole philosophy was: “My people have been oppressed by their enemies when there are weapons that could help them end the oppression.” He’s basically a Malcom X with abs. All he wanted was to give black people everywhere a fighting chance to liberate themselves and Wakanda had the resources to do that. No mindless revenge. No narcissism. No sociopathic tendencies. Just pure, clean, justice…and a few murders here and there. It was the first Marvel movie where I was genuinely thinking, “You know? He’s got a point. I’m gonna hate to see him die.” That’s a good villain.

4. It was All-Black, but not Anti-White

Black Panther did a lot for black culture that I can’t and won’t bother covering in this post. It was chockfull of A-list black actors, was directed by a black director, the visuals for Wakanda itself were designed by a black woman, and like I said before, it introduced the smartest character in the universe as a teenage black girl. And the fact that it was based in Africa makes it so much sweeter.

But in addition to all of this celebration of black culture, what made it so much cooler was that it didn’t swing to the extreme of villainizing white people. In Get Out, every single white person was a villain. But in Black Panther, there were two white characters in the whole movie and one of them was a villain and the other was a hero—who was even willing to die for the Wakandans. It was a beautiful expression of what it looks like to call out racism while still acknowledging white people who aren’t racist.

So there you have it. 4 things I loved about the movie. If you haven’t seen it yet, it’s most definitely worth a watch—whether you’re a superhero fan, a black culture fan, or just a regular movie fan.